A friend of mine at work loaned me a book about the travels of a Spanish boy in search of treasure. The story is a parable, and thus far the thrust of it is do what want in life rather what you feel you must do or need to do. It is better to pursue the dream that lies at the root of your identity rather than to give into necessity.

On the face of it, I could not disagree more with that philosophy. There are plenty of unpleasant demands that must be addressed and sacrifices that have to be made in order to prevent bad things from happening. Sometimes wars must be fought, or people must give up their ambitions or dreams in order to see to the dire needs of loved ones. And what would the world be like if everyone subscribed to this philosophy. Would it degenerate into a confused blur of chaos and pain as everyone set out to become a rock star, or actress, or sports hero, and nobody was there to raise crops, tend the sick, and look after the infrastructure that keeps much of the world's population alive? Or, are there enough people with practical dreams to do these things?

Certainly doing what you want often means leaving your friends and family behind. It necessitates relegating the close connections between people to a place further down on the big list of priorities. Leaving friends and family is something that I am getting to be an old hand at at this point in life, having moved away from Reno four times now.

On the other hand, in practice my life has worked wonderfully when living it in the dogged pursuit of what I truly desire. The world really does seems to conspire to help me along at such times. When I have oriented my life on trying to do the "right thing," it's gotten ugly.

Going on to the university after graduating high school because it was the correct thing proved to be disastrous. Dropping out to join the Army and finally do something real ended up being a four-year arc of happy serendipity. Even the shitty times from back then seem to resonate with a broad range of meaning and depth.

The subject of life's dreams and their importance has been of interest to me for some years now. Just behind the evolution of human thought and the complex world of military affairs, these collections of half-articulated desires and fantasies have been one of my favorite areas of inquiry. How does an assemblage of wants come together into a cohesive desire for a certain kind of life? What makes one job a calling and all others merely drudge work?

So now I am asking myself, is going back to school what I truly want, or am I trying to do the correct thing again? What I really want to do in life is write fiction. School will mean largely putting that on hold for a year, as the demands of course work and of a part-time job do not usually leave me with much time or interest in sitting in front of a computer.

On one hand, I am almost done with the book, and this time it feels good--similar to how "Lisa with Child" felt when it went out the door and ended up wining in the Writers of the Future. Staying on at work would allow me to finish the book without rushing it and provide a comfortable lifestyle while doing so. On the other, this is my last year in which to use my GI Bill benefits, and I actually did enjoy being in school this last time around. And on the other other hand, I do not like my present job at all. The current workplace leaves a lot to be desired.

So, over the coming two weeks I need to ask myself: How much do I really want to be back in in school, and how much I am just trying to change jobs? Can I get the book revised and incorporate everything that I learned in the course of writing "Lisa" before mid September, when the first full semester begins.
Posted by AlexB at 11:05 PM No comments:

So, I am enrolled full time at Portland State now and start class toward the end of July. Life is moving forward, though I will certainly miss herding monkeys.

I love being around the rhesus, the snow monkeys, the vervets, and baboons. I enjoy seeing their species specific-behavioral archetypes, as well as the bizarre--often eccentric--individuals who prove the exception to the rule.

No more monks. I think that this is the reason behind that sudden desire to have a canine companion again after well over a decade.

Moving on, looking forward, but gonna miss these kids something fierce.
Posted by AlexB at 12:11 AM No comments:

"You must be: a horse master; a scholar; a high minded gentleman; a cold-blooded hero; a hot-blooded savage."

My thinking from back in the days of Balkans peacekeeping and certainly now in the era of counter insurgency is that the ideal scout is a track star, engineer, close-quarters battle expert and a master of both mounted and dismounted reconnaissance as well as fully proficient in diplomacy and local cultural knowledge.

Arrival II: One year on 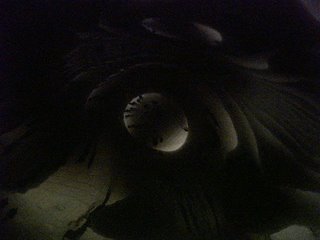 You know what the best part about making my first professional-rate literary publication is? It’s the fact that suddenly people want to talk about my work.

I can not adequately express just how much of a solitary exercise writing normally is. Not just the actual time spent in front of a keyboard in an internal world of thoughts and letters, but the fact that the details of putting words down in ink is one of the most uninteresting topics in the world for other people to listen to. We’re talking eyes-glazed-over type boring.

But now here I am living in downtown Portland at last. I’ve got my first pro science-fiction publishing credit, I’m on the verge of going back to school to finally complete my history BA, and suddenly people seem to like hearing about my writing. After three hard years, life appears to be coming back together all at once.

I have no illusions that all this can not be torn apart by a capricious world or through recklessness on my part. Yet for the first time in a long while potential seems to be jelling together into a concrete, realized reality.

Just over a year ago, back in Reno during the clustered swarms of earthquakes and with a sense of profound change in the air, I wrote about omens in my life and the feeling that I was hooking into a current of potential that was drawing me north. I feel the same way now, as though I am still riding that same channel of probability towards something significant.

Obviously much has changed with the world since I wrote "The Earth Also Moves...". We have a new president whose competency so far has been the antitheses of the old one. Our economy has taken a massive hit, and California is poised on the brink of the financial apocalypse that it has been marching towards for almost thirty years, but we have been extraordinarily fortunate in many ways as well. We avoided a complete financial meltdown during the closing months of last year, and the Truckee Meadows earthquake cluster seems to have played out. All that destructive energy apparently drained away in small shivers rather than in the monster trembler that Reno was overdue for. I had survived a staph infection earlier, and in December I would end up walking away with neither a scratch nor a bruise from a vehicle collision involving my little Hyundai and a Chevy Silverado that outweighed my poor doomed car by at least twice over.

And the good omens of specificity have continued on for me. My favorite of these was running into my first Suicide Girl on a Max train two days after I found out that I placed in the Writers of the Future contest. I was seated and wondering if my win was the start of something larger; if I could actually go on to make further sales, when I noticed a woman with a fantastic set of typeface tattoos covering her right arm two seats in front of me. And then I recognized the woman herself. That was seriously cool, a kind of flesh-and-blood, ink-and-skin oracle of the printed word manifesting her self from out of the medium's æther for my benefit. And prior to learning about placing second out of nearly a thousand contestants, there were all kinds of small, nice signs whenever I began to doubt that that anything would come of my entry.

The win itself was a wonderful portent, as for the first time in fifteen years I had started to grow tired of writing. Up until this year I had written--to steal a phrase from William Gibson--like other people watch TV. It was something I just did every single day. I loved it for its own sake, but the sinking feeling that nothing was ever going to come from it was starting to drain my enthusiasm.

The odd thing about all of this is that I am a positivist, or at least I used to be a strict one. I still believe that empirical observation is the root of all success and the prerequisite of sound thought, but there are times when I feel I am tapping into a parallel bandwidth, or that my intuition is somehow skimming through the massive physical complexity of the world in a way not possible for purely rational thought.

Sometimes I believe in karma as well. I do not know if it is just a psychological and social feedback system, or if there is anything divine or supernatural about it, but it does seem to work--sometimes amazingly well.

I feel like I am where I am meant to be, and that I am again starting to do the things that I was put here on earth to do in a way that I have not felt since my time in the Army. It’s a really blessed sensation to have.
Posted by AlexB at 10:46 PM No comments:

Sweet! The volcano cam is back up. 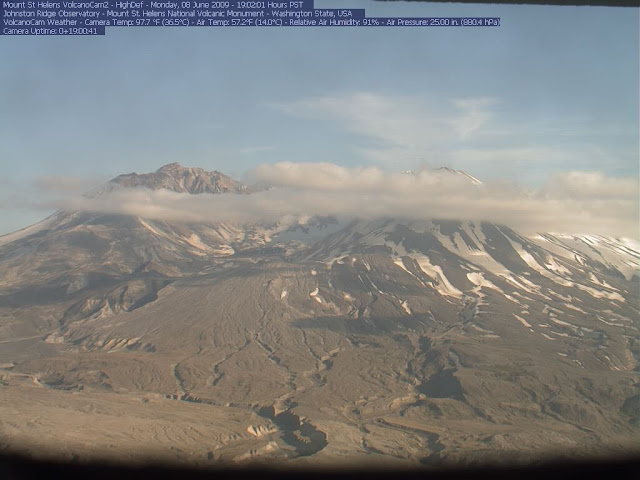 Of course now that I'm no longer living out in the sticks, I can just walk up to my rooftop and watch the south side of the mountain whenever I want. Still, it's nice to be able to see the more interesting north side again, especially during the winter months when the roads going up to Johnson Ridge are choked with snow.
Posted by AlexB at 9:06 PM No comments: