The spirit of times and authors 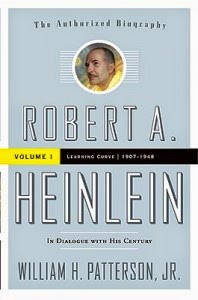 I recently finished a book I'd been looking forward to for the longest time: William Patterson's biography of Robert Heinlein.

I was one of those adolescents who devoured Heinlein's juvenile fiction and pulp stories. I've gone back to him several times since then, long after I've stopped revisiting most Golden Age science fiction writers.

Other authors from the period might have had better-developed Space Age ideas, a more literary style of prose, or wrote more evocative scenes, but Heinlein's stories were the ones that many thousands of us wanted to actually live in.

Aside from some eminently relatable heroes and heroines, and well-written dialog, part of Heinlein's enduring draw across the left - right ideological divide here in the US, from the 1960s untill this past decade, stemmed from his moderate libertarianism. Social justice and willingness to sacrifice for the collective good of a community or nation all have a strong presence in his works, alongside the personal attributes of self-reliance, personal drive, and other virtues that present day conservatives emphasize.

Many of his stories follow plucky, hardworking youths or younger men who thrive and overcome numerous obstacles in settings where a benevolent world state or national government plays a key role in maintaining a broad-based peace and prosperity.

If that sounds like a hard contradiction to swallow, then you may well be seeing Heinlein in the polarized light of present day ideology and historical circumstances. Neither Heinlein nor the times he lived out the first half of his life in fit comfortably within either side of our present political spectrum.

Back then, Heinlein's strong beliefs in responsibility and hard work, and his die hard faith in socialism during the first half of his life, were hardly a remarkable combination. But it was also a very different economy and political era. One in which both the US and global economy had been mired in a multi-generation period of instability. Imagine the 2008 recession happening once per decade, with persistent currency instability, major banking collapses, and going on and on until the world-changing calamities that were the Great Depression and Second World War.

Which is why you should read Patterson's biography of Heinlein. The author keeps the promise of his tagline, In Dialog with his Century, and grounds the reader squarely in the period. His exploration of Heinlein's relationship with the issues of the day frequently takes place when looking at Heinlein's connections to the people whose lives intersected with his. Primarily in the social spaces of small town USA, the Navy, and among a who's who of science fiction writers during the age of pulp and the nightmare of World War II.

Among the more interesting issues covered by Patterson are:


For me, those connections help explain why literary science fiction was so much more relevant and a part of the spirit of the times in popular culture and even on a national policy discussion level than it is today.
For many readers, it will also probably come as a surprise that open relationships and other alternative forms of marriage and family were a thing during the 1920s in the United States. If you've grown up listening to the endlessly self-congratulating Baby Boomers (the 1940s, 50s, and early 60s born generation), chances are you've been immersed in a narrative that makes it sound like this country was a frigid wasteland of Victorian or Puritan sexual mores. At least until the Boomers burst on the scene during a 1960s frenzy of liberation. A conceit Heinlein once noted when remarking on how "...each generation thinks that it invented sex." The more complicated truth is that rebellions and experimentation with alternative systems of relationships and love were already underway during the 1800s in the US, both in the secular Romantic movement and in emerging religious movements such as Mormonism.

During the 20th century, the generation that would fight or otherwise participate in World War II as enlisted men and women, and company grade officers had their own well-documented - and at the time famous - period of heady experimentation. Mostly during their twenties and thirties. A period that along with a perceived penchant for race music (jazz), dance halls, and social causes like an idealistic wave of 1920s and 30s legal challenges to do away with Jim Crow laws, got them labeled as a cohort of spoiled degenerates. Yes, seriously.

I'm probably making more of the setting than I should. Even if you have no interest in the period and its influences, the story of Heinlein's life makes for a mostly good read of struggles and triumphs and setbacks. If you are interested in the history, it will help with puzzling how a man with a strong commitment to the institution of marriage and virtue of fidelity had such very unconventional but sincere definitions of both. Lastly, it sheds much light on some of the turning points in Heinlein's life and how he came to have a decades-long impact on science fiction.

Evolution of a stellar explosion.

New posts coming soon. Work and fiction writing have eaten into my time budget for the past week and a half. So the poor blog has been slighted when divvying up the daily word-production hours.

But, in the meanwhile: The gorgeous and evolving aftermath of an exploding star, as captured by the Hubble operations team over a four-year window. 2002 - 2006.