...is my muse. Or at least that's the excuse I'm giving for my Planet Earth addiction.

Each iteration of watching through the series leaves me jonesing to write fantasy. There is something about landscapes, interconnected systems of nature, and bizarre lifeforms that pushes that particular button for me.

Written science is my major inspiration for science fiction. Well-crafted books by actual researchers penned for popular consumption instill the urge to communicate the world's underlying dynamics through characters and plot. They also drive me to pick up journal articles to verify that I actually understand the matter at hand. Magazines such as Scientific American, Discover, Nature, and Science Weekly provide inspiration as well, though to a lesser degree.

Blue collar people are another important source of literary motivation. All of the enlisted soldiers, NCOs, and the biotech technicians from working-class backgrounds whom I've known. Some were absolute assholes, others were the among the finest human beings that I've met. A few were a mixture of both. Either way, those with blue-collar childhoods who work in technical or craft-oriented fields often carry a set of tensions between passion and professionalism, which makes them more dynamic and alive than their middle class counterparts. Autodidactic and world-traveling members of the working class are also more prone to pragmatic insights and a moderate non-ideological wisdom than people with formal educations.

All that being said, the gifted and talented also inspire. In particular, those who successfully marry abstract theory to the blood and chaos of the world. Engineers, medical doctors, research biologists, veterinarians, and competent military officers. Also, computer science people. Not just because I have several programmer friends, but because their blended and expressive mindset seems to rest somewhere on the enigmatic boundary between art and mathematics.
Posted by AlexB at 2:09 PM No comments:

...of many East Asian cities. I'd like to see more of this in the US. Either that or variations of the 1920s updated with more glass and steel. Art Deco and and Arts and Craft were the twin high points of elegance in American architecture and interior design.
Posted by AlexB at 1:58 PM No comments:

If this were an actual game, I'd play it!

Or maybe I'd have a hard time finding other players. Not everyone is obsessed enough with the evolution of human thought to have spent their twenties reading philosophy off and on.
Posted by AlexB at 4:11 PM No comments:

A long and winding article

But still of interest for those who are curious about the current literary context of neurology in fiction.

Rise of the Neuronovel
Posted by AlexB at 4:00 PM No comments:

Birthday 37 - One year on in the city

It's been a strange day or so. Nearly everything technological has balked when I've tried to accomplish practical work. From the school's network, to the machine for loading money onto my laundry card, to my PC deciding that its security software had expired promptly at midnight, it's been a twenty-four hour period of machine mischief centered on my birthday. At the same time these are all small problems easily overcome by making minor adjustments.

That and several things that I've been waiting on with regards to planning my immediate future finally resolved themselves today. Chief among them was receiving the dates for the Writers of the Future awards ceremony, workshop, and book signing.

I'm seeing all kinds of omens in the events around me once again. The feeling I have from all of this is yet another shift in the order of things. One similar to the the wave of odd signs that seemed to be haunting me in the spring of 2008 when I was preparing to move up here.

Only this time it's more a set of shifts around me. No far reaching changes in the world to ride out, but rather a reconfiguration in the local realities of my life. It's a sense of fluidity, of adapting, or hitting a kind of stride within a larger set pattern.

I still wonder brings on these episodes. Normally I am an empiricist and rationalist, and yet there are these stretches of odd insights that presage significant events or periods for me.

Some kind of subtle stress below the level of conscious awareness? Or is this some strange bandwidth of intuitive analysis. One thing I've learned in this life is to never underestimate the perceptive ability of the pre-rational brain--a computational system with millions of years of trial by fire in the context of evolutionary fitness.

True or false, the sense of connection and interrelatedness with the world at large is profound, and it seems like a healthy way to live. That and it really does seem to work well for me when making major life decisions.
Posted by AlexB at 12:13 AM No comments: 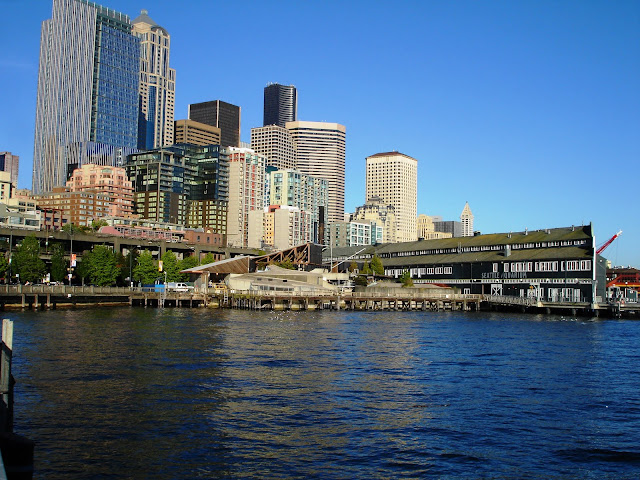 One of my history professors related an opinion one day in class that Oregon is a nineteenth-century state. The vast majority of its original Euro-American settlers arrived overland by foot and horse during that period. Consequentially the state's culture, politics, and architecture bear the imprint of that century. Washington State by contrast is a creature of the twentieth century. Most of its early generation settlers arrived via train during that time, and this is reflected in the scale of its industry and major city. 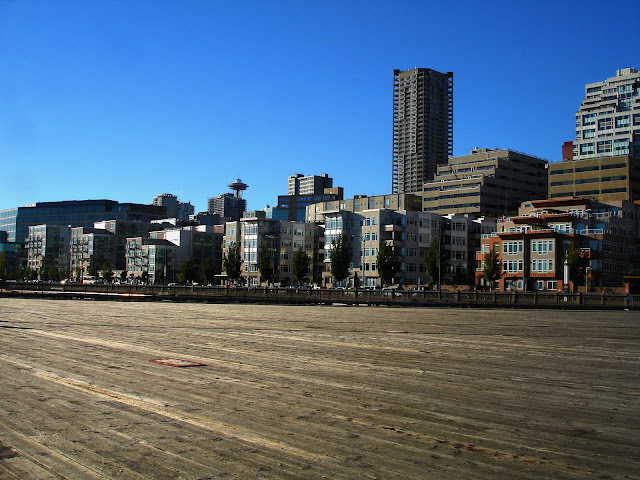 The Olympic Mountains and Puget Sound 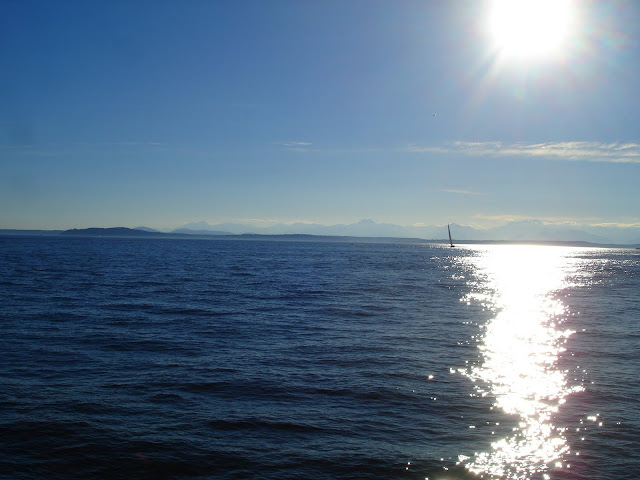 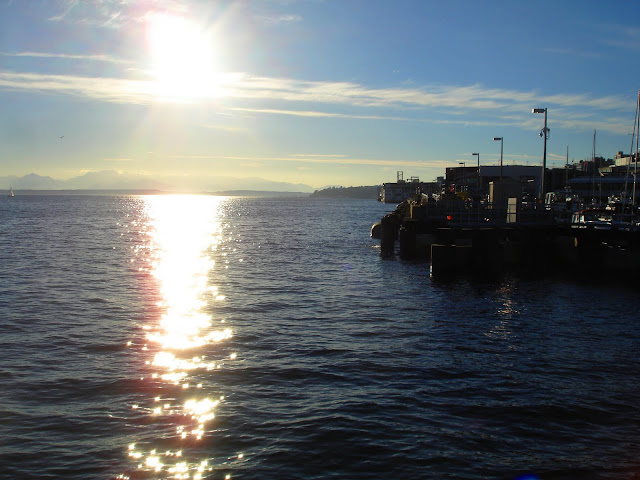 Seattle is certainly a much more science-fiction looking town than Portland. 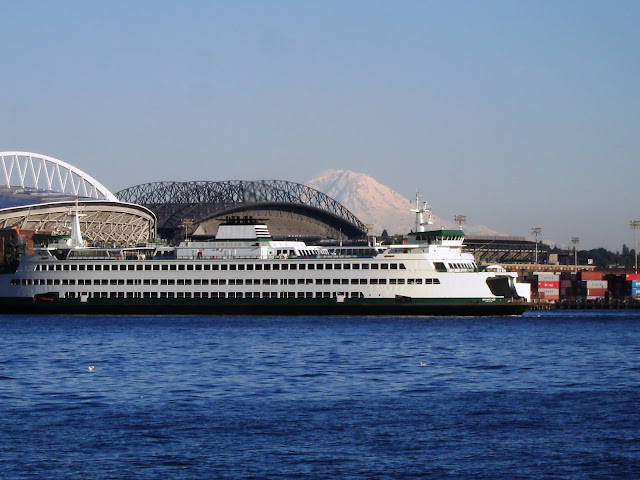 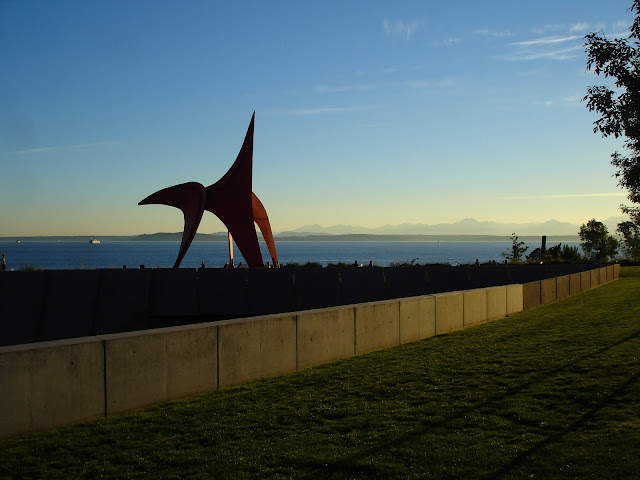 My super-secret 1920s Art Deco hotel. Cheap and just blocks away from the waterfront. 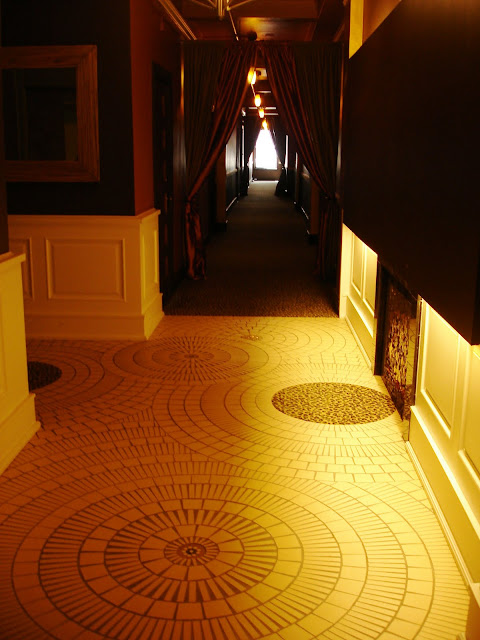 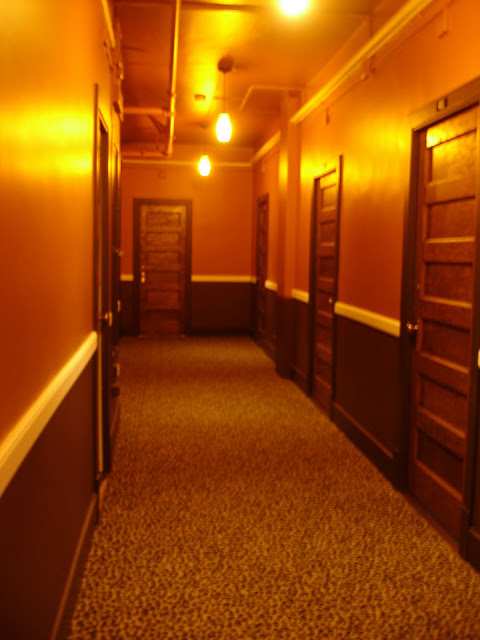 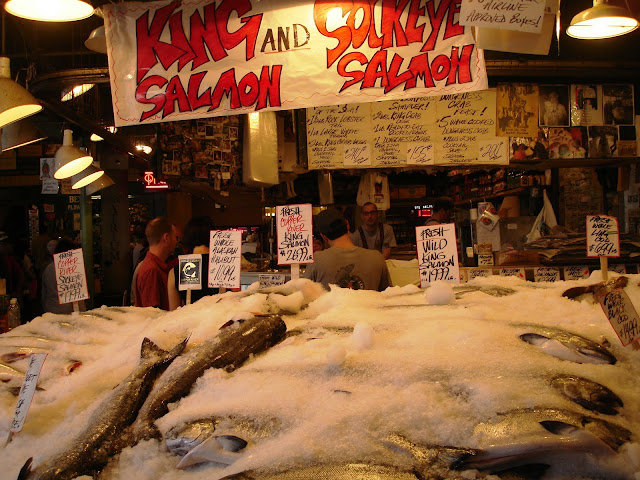 Monkfish: A tasty prehistoric monster from the deep! 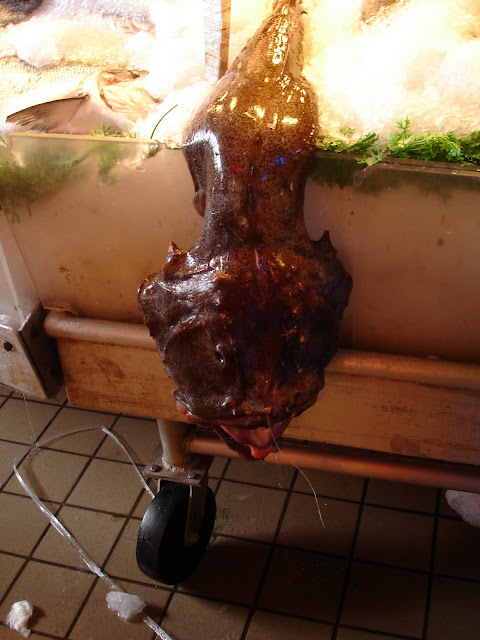 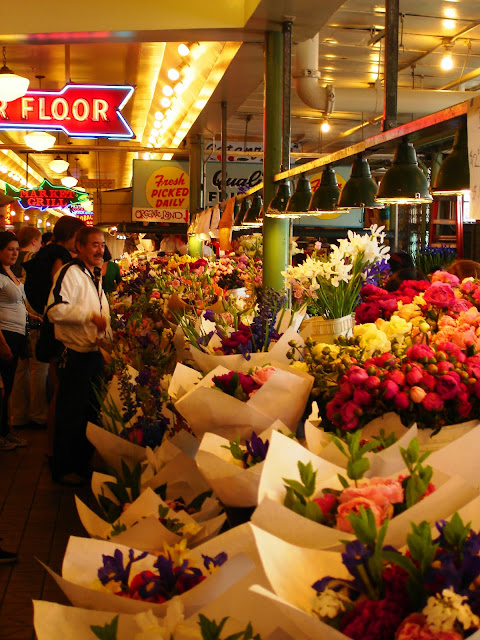 A mini-pilgrimage to Seattle's Science Fiction Museum and Hall of Fame to get psyched for the Writer's of the Future awards ceremony and workshop. 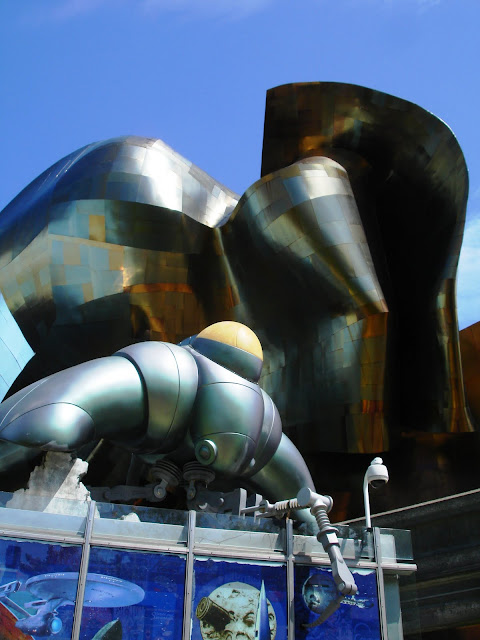 The Norwegian/Swedish word for "heart." To me it feels rather clinical in this context. That or swarthy sea-going raiders ritualistically consecrate each condominium with a blood sacrifice. Either way, it's a good example of the influence left by many Scandinavian immigrants on this region. 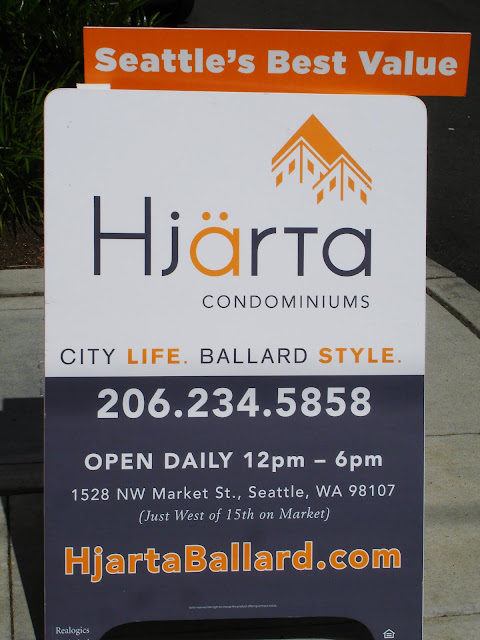 Seattle's swanky main train station. Thankfully they are stripping away the low and nasty 1970s false ceiling to expose the ornate forty-feet-high original with its artwork. 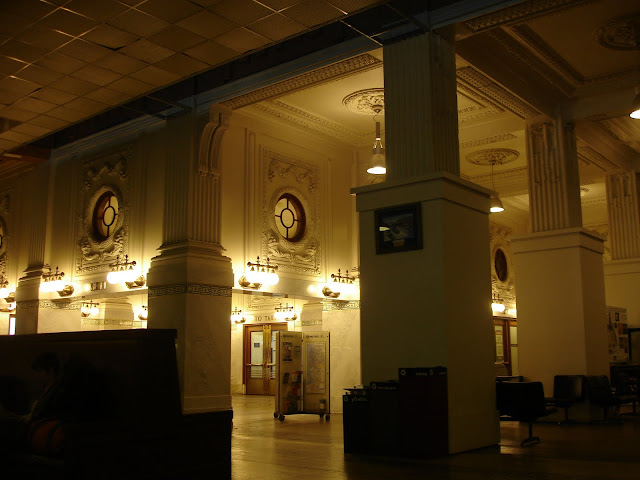 This is my first spontaneous train/backpacking weekend since living in Germany. With school winding down it feels nice to actually have something of a life again. 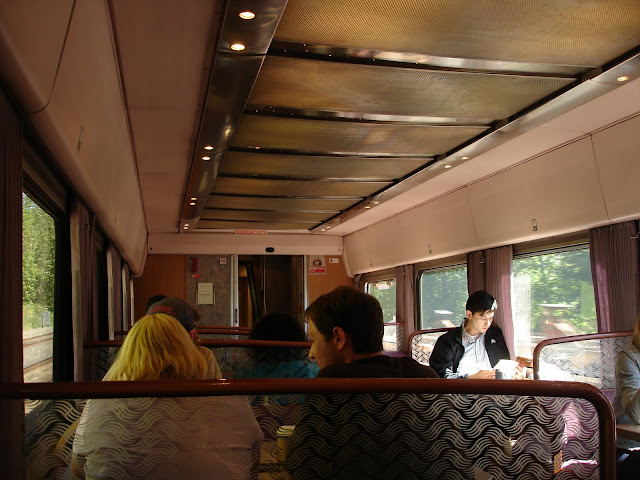 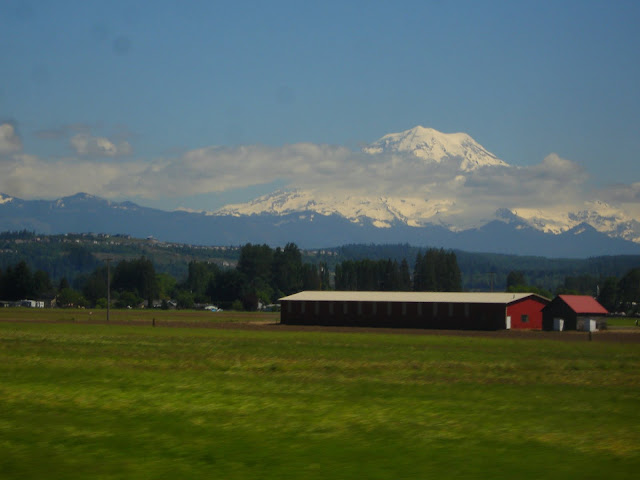 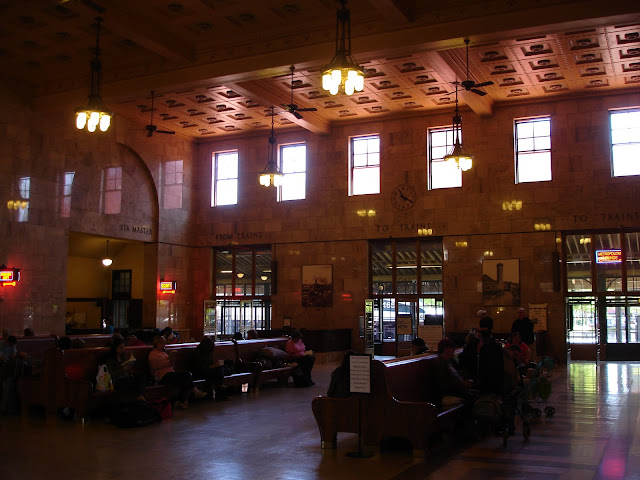 A teaser trailer for HBO's adaptation of George Martin's A Song of Ice and Fire novels. The most mature, ruthless, and character-driven line of fantasy books that I've come across.

Winter Is Coming
Posted by AlexB at 1:10 PM No comments:

I normally don't comment on politics here--at least not with any regularity--but I was glad to see California's Proposition 14 pass yesterday. Eliminating closed primaries seems to have done a good job in promoting moderate candidates with pragmatic views over in Washington state. Given the current environment of polarization here in the US, moderation and pragmatism are sorely needed virtues.
Posted by AlexB at 2:15 AM No comments:

At times the scale of human suffering in our world can be mind-numbing...

Views of North Korea Show How a Policy Spread Misery - NYTimes.com
Posted by AlexB at 9:58 PM No comments:

A rainy start to the city's rose festival 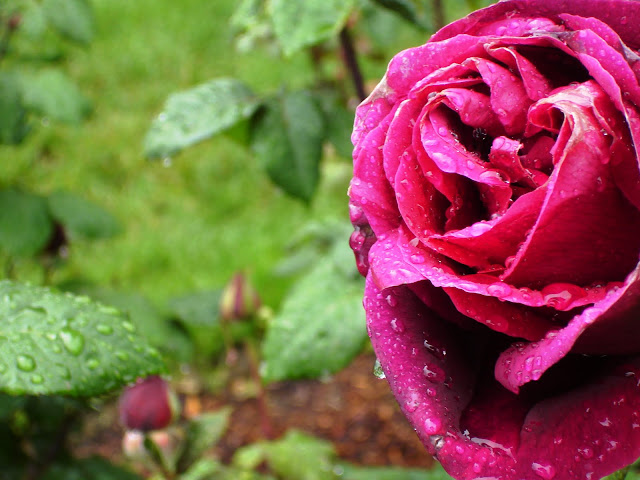 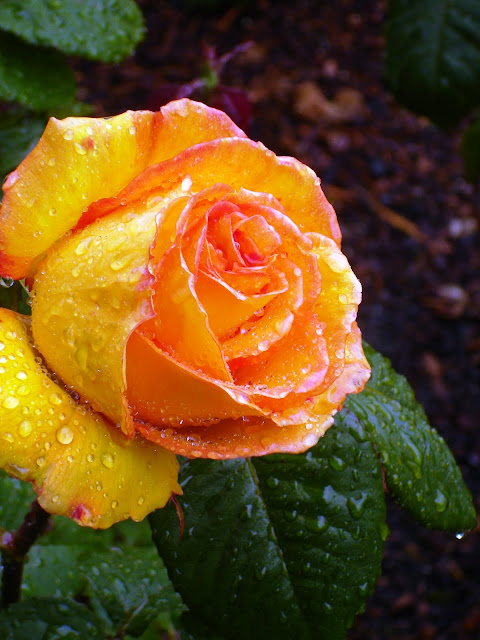 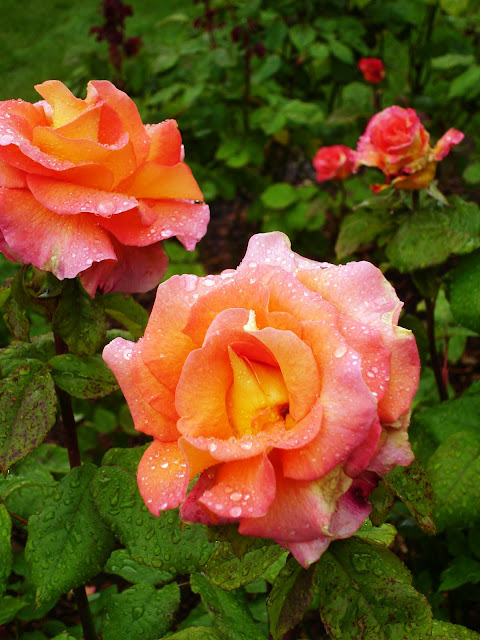 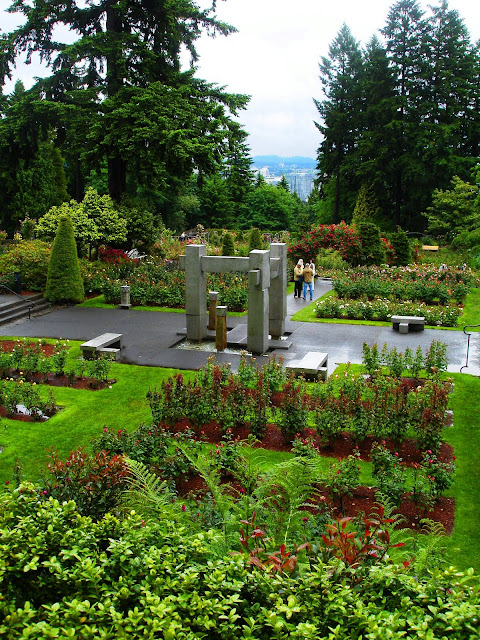 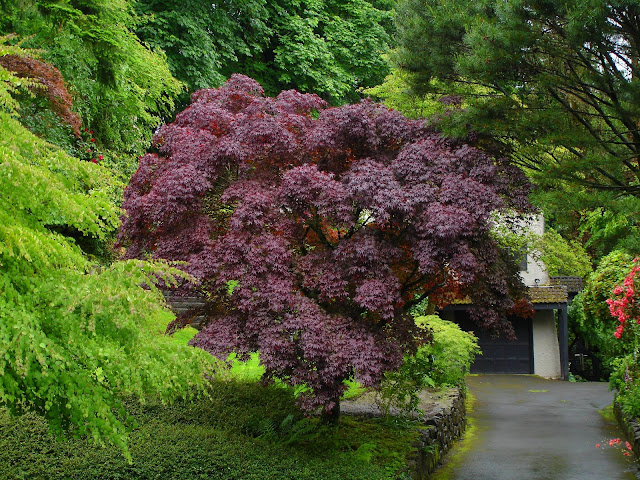 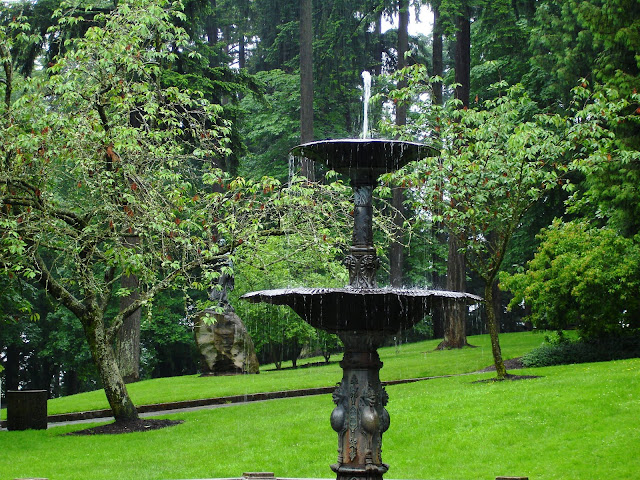 'Goonies' fans descend on Oregon town to celebrate movie's 25th anniversary
Posted by AlexB at 12:33 AM No comments:

I'm not saying I condone what these tourists are doing...

...but given the chance to watch a volcano fling house- and car-sized boulders, I'd probably give into the same temptation. Witnessing that scale of energy release and transport would be a religious experience. That being said, I would not stand with my back to a cliff.
Posted by AlexB at 11:14 AM No comments:

So it was retro burlesques...

...that were in fashion a few years back. Nowadays it appears to be belly-dancing fused with Goth or tribal music.

Ironically, the one time in life that I went to strip clubs with any regularity was not in the military. Rather it was back when I was in the private sector of the monkey herding industry, and it was largely female co-workers who were the instigators behind our group outings after work. They seemed to enjoy the atmosphere and freedom of the clubs, and they were the ones who purchased all the lap dances.

They spent a good deal of time picking out which dancer they liked best, and then discussed the woman's looks, clothing, and charms at length before hiring her. I think it was a way of feeling beautiful, of borrowing another woman's grace and good looks for a short while to augment their own. In someways it's similar to how the primary attendees of retro burlesques are primarily hetero women.

Those after work excursions also says something about the differences between the various branches of science. When I was working as a bench chemist technician in the climate sciences there was no way anyone in the facility would have set foot in the parking lot of a strip club, let alone go inside. Even eye contact or greetings made in passing in the facility's hallways were few and far between.

Monkey jockeys, on the other hand, had an entirely different outlook. A family member who joined a group of us for lunch once commentated that my outgoing co-workers expressed themselves more like a group of theater students than technicians.

The difference was even more night and day when it came to the scientists. The sociability of the of the PhD holders in biology was remarkably different from the almost autistic focus of most of the chemists.
Posted by AlexB at 1:40 PM No comments: 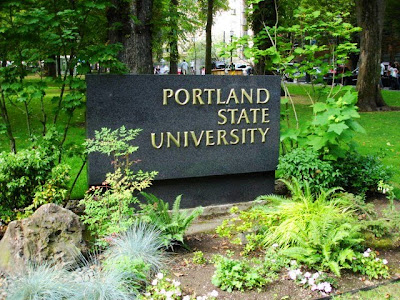 I turned in the last major paper of my undergraduate career today...

What a term it's been.

All that's left is a pair of touchy-feely University Studies courses and a language exam.

What I'm most looking forward to now is getting back to literary writing. Well, that and having weekends and evenings off again. And maybe a social life at some point. That would be nice too.
Posted by AlexB at 6:02 PM No comments: