The patient year in music

Music was somewhat more mild and introspective for me this past, which probably comes as no great surprise given that this was largely a year of waiting.  Namely the long wait for employment while hunting for a post graduation job. A wait which gradually gave way to a busy self-employment schedule as any sort of a normal job failed to materialize, but more and more copywrite and paid literary gigs came in through the door.

As laid back and philosophical as the music was, it still tended to stay on the brighter of the emotional spectrum.

The seasonally migrating Portland, Oregon and Marfa, Texas based YACHT turned out one of my favorite albums for this orbit around the sun with Shangri-la.

Meanwhile the more ambient and chill strains of electronica have continued to fill up a larger and larger part of my playlists.

The discovery of musician Jan Jelinek thought the release of the now famous video of International Space Station footage defenitely helped with that move further into realm of ethereal sounds with some faint, bop-era jazz sensibilities.

All of which has been an enormous professional boon. Spending eight to twelve hours per day behind the keyboard writing has meant that I've needed to find some healthy stimulants to help maintain focus and task-concentration for extended periods of time. Ambient music with a steady, low-grade kind of intensity and no distracting lyrics has filled that need perfectly.  Well that and a lot of espresso and tea.

Meanwhile, attention-grabbing and distracting music has generally stayed on the brighter side of sound as well. In that vein, The King is Dead by Portland-area band the Decemberists introduced several good tracks.

Some of which do a fantastic job of evoking atmosphere and sensory impressions.

A good friend just reminded me that I haven't done a yearly musical post, which is something I normally post on this blog during the holiday season. So consider yourselves forewarned that one is on the way. It wasn't a peak year for great music, but there were still a number of good tunes that made it all worthwhile.
Posted by AlexB at 12:21 PM 3 comments:

After a two-day holiday celebration that turned into a wonderful five-day mini-vacation, it's time to put the headphones on and get back to writing.

What's truly scary in life? Living in a place where mourning for national leaders is mandatory.

Personally, I'm happy to see the 'Dear Leader' exit stage left much the same way I feel that Hitler, Stalin, Mao, and Pol Pot leaving this life helped to improve the world. The year I spent not far from the Intra-Korean DMZ came at the tail end of the great famine on the other side of the border. Conditions in the North were so dire that during those twelve months some 400+ North Korean citizens defected across one of the most heavily mined military frontiers on the planet.

For all of those fortunates who made the crossing there were many who died along the way. Some were killed by mines or natural hazards; others shot by their own nation's military. Then there was those who fled into north China where they faced uncertain futures hunted by the Chinese police and haunted by the prospect of forcible repatriation to their homeland and interment in one of their country's many gulags.

A terrifying possibility that hundreds of thousands of North Korean refugees continue to face.


The Aquariums of Pyongyang: Ten Years in the North Korean Gulag

The future of air combat vehicles

Defense Tech.org has an article up about the the Navy taking delivery of two of Northrop Grumman's X-47B unmanned aerial combat drones to assess their capability for making carrier-style landings and take offs. 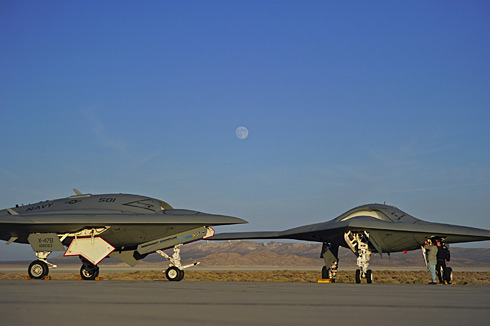 The X-47B represents a line of fighter evolution that we should have been pursuing this past decade instead of dumping billions into the badly overpriced Raptor and F-35 Lightning programs. However, rather than look at aircraft designed to counter a specific threat or drones capable of outmaneuvering and out-loitering any manned vehicle, the Air Force went on a frenzied, capability-driven spending spree seemingly set up to produce a gold-plate combat vehicle.

All of which helped to drive an out-of-control price-spiral that killed the Raptor well before its production run was complete and may still tank the Lightning. The icing on the cake is that these aircraft could also be obsolete in less than a decade faced rapidly increasing capabilities of drones.

Are drones capable of going head to head against manned planes in air combat at this time? No. But their capability to maneuver and identify and engage targets has been advancing at Moore's-Law rate in recent years. The DARPA Grand Challenge provides an instructive example of this  rate of increase. In 2004 none of the competing, land-based vehicles succeeded in navigating the dessert course and completing the race. In 2005 nearly all of the entrants surpassed the old course's requirements, and since 2007 subsequent non-DARPA unmanned vehicle races have seen new generation of vehicles mastering far more difficult courses in increasingly complex environments.

Not that I think humans will be out of the air-to-air business completely in the foreseeable future. One thing that has had me concerned for sometime is that the US' unchallenged dominance of the electromagnetic spectrum cannot last forever. At some point, and likely not all that far off, someone will be able to contest control and interfere with communications between land based operators and unmanned aircraft. So air-to-air UCAVs will have to possess a capacity for autonomous air-combat maneuvering, and it will be a good idea to have a manned, high-performance platform capable of following the drones into the battlespace to exercise direct human command and control via line-of-sight communications.

But first, we need drones, or at least to maintain a fleet of manned aircraft. With a gaping Raptor-sized hole blown open in its future inventory and its current fleet rapidly aging, I'm very surprised that the Air Force hasn't started its own UCAV program.  Or at least begun purchasing reasonably priced, improved versions of proven platforms like Boeing's stealthy F-15SE Silent Eagle to fill in the near-term shortfall of manned fighters as many already stressed, high-performance air frames move into their third decade of service.

Yes it feels a little 90s at times, but Serial Lain remains an interesting and in places non-linear tale of a young girl's uneven and rough cybernetic ascension to godhood--or something close to it.

Still busily cranking away on my various writing gigs...

But in the meanwhile, a bizarre video mash up of Calvin and Hobbes snowmen and Akira Kurosawa from some folks in North Dakota. For all you cinephiles out there.

Voyager 1 Speeds Toward The Brink Of Interstellar Space : The Two-Way : NPR

Voyager 1 Speeds Toward The Brink Of Interstellar Space : The Two-Way : NPR:

DNA: The next big hacking frontier - The Washington Post

DNA: The next big hacking frontier - The Washington Post:

I'd always thought that underseas mountains plunging ever so slowly into subduction zones would act as sticking points and make subduction zone earthquakes worse. Apparently the opposite is true.
BBC News - Undersea mountains march into the abyss:

Here it sits, neglected for these few weeks while I write and write elsewhere. But that's OK, because my daily fiction word count is on a roll. I've had a few 10,000 word weeks, not counting freelancing work

In the meanwhile, some science fiction writing music with a heroic bent: Genre Playlist.

I used to avoid listening to music while writing, but given how much time I spend in front of the computer these days its become something of a necessary stimulant at times alongside tea or espresso drinks. Music without lyrics generally works the best, as it provides the highest ratio of motivation vs distraction.
Posted by AlexB at 12:11 AM 2 comments:

Some lovely time lapse feeds of the skies over Oregon's deserts, coastline, and volcanoes.


By Uncage the Soul Productions.
Posted by AlexB at 12:09 PM No comments: