Book review: The Court of the Red Tzar 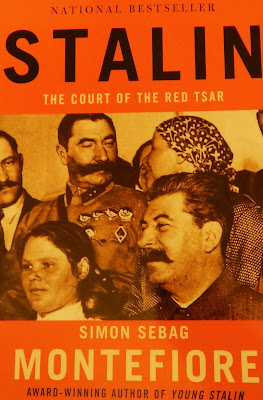 It’s hard not to go numb when reading almost any history of the Soviet Union from the 1920s to the 1950s. The number of atrocities famously curves upward from the level of human suffering into emotionless numbers. Montefiore’s eminently well researched, Stalin: The Court of the Red Tzar, avoids inflicting such a loss of feeling by staying focused on individual and familial tragedy.

What makes this work of popular history so compelling is that the personal intrigues, birthday parties, denunciations, weddings, disappearances, evenings of cinema, torture, and ever-increasing fear or debauchery, all play out in the small but cliquish circle of families who ruled the Soviet Union during its darkest years. Then there is the fragmenting humanity of the man who dominates them all. As they rise in power, fall into exile or prison, are 'rehabilitated', or meet with the executioner’s bullet, none of the magnates, children, wives, or extended families of the Kremlin can escape the shadow of a loving father and bereaved widower already steeped in the blood of ten million Soviet citizens by the time Hitler sets the Holocaust in motion.

When I was younger, Hitler was my personal embodiment of evil. "Never again!" seemed like a goal that was both achievable and of dire importance in the aftermath of a catastrophe as unique as the Holocaust. Later, as I traveled the world and studied history, it became apparent that there were a handful of other totalitarian 20th century rulers who had matched or rivaled Hitler in number of tragedies inflicted. He was just the one that we focused on in the West.

At present, the rise of a new set of totalitarian autocrats may seem like a remote possibility. We've almost immunized our cultures against another Hitler, Stalin, Mao, or Pol Pot. We've enshrined Orwell, and popular entertainment feeds us a steady diet of fictional dystopias featuring oligarchs armed with sweeping propaganda apparatuses and panoptic surveillance technologies. There's a reason the Snowden revelations touched such a raw nerve here in the US. Sixty years of film and novels have implanted a deep aversion to unchecked state-surveillance.

At the same time, so many have forgotten the origins of the ideologies that gave rise to totalitarian rulers on both the extreme right and left. Communism at its heart was a reaction to the upheavals of industrialization. The economic transformations that forced millions of farmers from their homes into decades of urban poverty, malnutrition, and lifestyles alien to those of the small, family-oriented communities they'd left behind. Nazism and Fascism were the far right answers. Blood drenched responses to communism, and radical attempts to tame the instability of industrial economies.

So it's worth our while to look back. Then glance around to see if anything looks uncomfortably familiar as a new wave of technologies challenges our societies in the here and now.
Posted by AlexB at 11:38 PM